Fishing season is off to a great start. We have two outings under our belt and only one hook through the foot, not a bad ratio. Things have changed a lot since last year. Cutting worms in half, no problem. Hooking bait thru the eyeball, not an issue. Our poles have doubled in size, we’ve got some fancy new lures, and the boys are able to sit still for five full minutes. That’s five minutes more than last summer!

Although we haven’t caught any fish yet our hopes remain high. I’m ready to cook the first thing we catch but in the meantime some shrimp from the freezer will have to do. After last week’s beet debacle I needed to make amends, and I know shrimp is usually a sure thing…

For the dipping sauce:

1 1b. Raw shrimp, large or jumbo, peeled and deveined

Mix together the sour cream, mayonnaise, lime juice and hot sauce. Add salt and pepper to taste. And more hot sauce if you like it spicy. Refrigerate for up to an hour to let flavors combine. Dipping sauce can be made ahead and stored in refrigerator for 3-4 days. 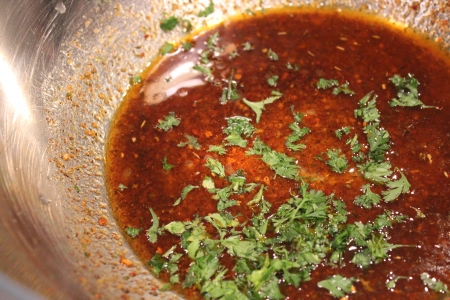 Add the shrimp to the mixture and coat well. Marinate shrimp for 15-20 minutes. 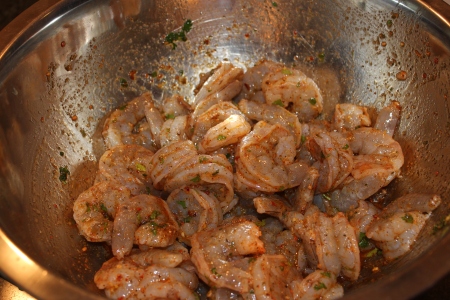 Heat a large sauté pan on medium high heat. Add shrimp to pan and cook no longer than 3-4 minutes per side, depending on the size on the shrimp. Shrimp are cooked when they are opaque and turn pink.

Place shrimp on platter with dipping sauce, and garnish with lime wedges. Serve cold or at room temperature.

Liam (age 5): “Shrimp are my favorite, better than cheese”

Next time we are doubling this recipe!

This weekend instead of fishing at the usual watering hole, we decided to try the big pier. The place where “real” fishermen go; the ones who actually know what they are doing…

When we first arrived at the pier lugging our Star Wars fishing poles there were a few chuckles. But we held our heads up high, cast our lines, and waited for the fish to bite. And waited. And waited. During this down time, the boys managed to befriend everyone on the pier, Brian dropped the filet knife and poked a hole in his ankle, and I checked my emails. It was actually quite relaxing, except for the knife incident.

After some time, our friendly neighbor took pity on us and gave us snapper bait to replace our night crawler worms. It did the trick, our luck turned around. Within minutes, Matthew hooked our first catch of the day and the whole pier cheered. We were finally in, accepted among our fellow fishermen as legit, Star Wars poles and all. The day continued with much success, we caught several small snappers and one large robin fish. Picture a fish with wings that barks like a dog. We threw that one back!

Once the boys learned that our fellow fishermen were actually eating the fish, they decided they wanted to as well. So we kept two for dinner and gave the remainder to our neighbor, to replace the bait he generously shared with us. I knew this day would soon come so I had already done a little research. All I had to do was scale the fish, chop off the head, gut the fish, and then fillet it. Simple, right?

Step 1: Clean fish under cold water and place on covered work surface. Outside if possible, it gets a little messy. 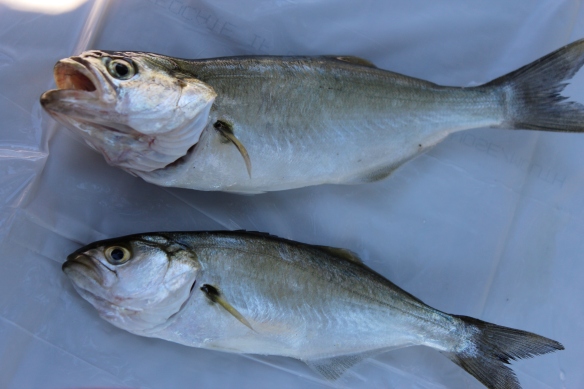 Step 2: Scale the fish by holding it firmly by the tail and brushing towards the head. Remove all scales. Repeat on other side. If you don’t have a scaler, you can use a butter knife.

Step 3: Cut off the head. Of course I was picturing a scene from a horror movie with blood spurting everywhere. But much to the boys’ disappointment, there was relatively little.

Step 4: Take out the guts – this was the grossest part and once I cleared this hurdle, it was smooth sailing. After removing the entrails of the fish, rinse again in cold water.

Step 5: Hold the tail and cut off the fillets on either side of the spine. Rinse fillets in cold water. And you are ready to start cooking!

Season the fillets with salt and pepper. Heat a sauté pan on medium heat and add the butter and minced garlic. Cook the garlic until fragrant, about two minutes. Add the fish to the pan and cook about 2-3 minutes on each side. Remove fish from the pan and spoon the garlic and butter over the top. Add a squeeze of lemon, if desired.

A lot of effort for one bite of food, but our amuse-bouche was delicious. I followed up the appetizer with rosemary chicken, which was also delicious. 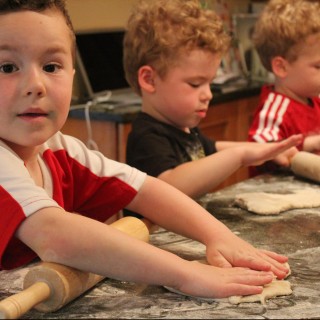